Why do we make our baby bottles without these chemicals? 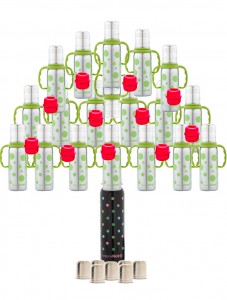 Bisphenol A or BPA is a compound used in many polymer based plastics like Polycarbonate Plastic (Shatter-proof clear plastic).  This plastic is used to make baby bottles.  BPA is used to strengthen and make plastics more flexible.  Plastic without BPA can be more fragile.  In the body, BPA acts as an estrogen receptor agonist, which leads it to behave in a similar way to human estrogen.

Many studies have indicated that there are concerns about BPA’s effects on infant and fetal development.  In April 2008, the Canadian Government listed BPA as toxic and banned the use of polycarbonate plastic in baby bottles and infant formula can linings.

“We believe that the current safety margin (for BPA) needs to be higher. We have concluded that it is better to be safe than sorry.” Canadian Health Minister Tony Clement , April 19, 2008

PVC or Polyvinyl Chloride is used to make vinyl polymers and is used to soften plastics, and increase flexibility.  It is commonly used in a variety of plastic products and piping.   It is considered to be a carcinogen and can leach Lead and Phthalates.

Phthalates are used to make plastic more flexible, durable and longer lasting.  Phthalates are easily released as plastic ages.  They have been linked to Asthma, Metabolic Disorders, Attention Deficit Disorder and interfere in hormone production.