the safe, sustainable choice for your baby.

The wonder and magic of childhood is something you’ll find in every organicKidz® bottle. organicKidz® brings you the World’s First Stainless Steel Baby Bottles as a safe and practical alternative to plastic, aluminum and glass drinking containers. Made with babies and parents in mind, organicKidz® bottles are free of the toxins that plastics can contain and won’t break like glass bottles. From infant to toddler to school and beyond, our bottles provide your child with the Safe, Sustainable Choice. 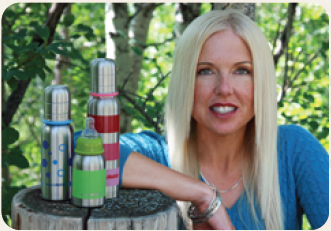 Jane founded organicKidz® in 2008, out of a desire to provide children and parents with a toxin free, unbreakable alternative to plastic and glass bottles. “When the BPA scare hit, I felt tremendous guilt that my children had used plastic bottles. At the time I thought I was using the best bottles, but the brand I was using had the highest levels of BPA.  I don’t think I will ever get over that guilt, but it fueled a passion in me.”